I invite you to read this best-selling, award-winning children's picture book, "Dancing With Tex:  The Remarkable Friendship To Save The Whooping Cranes."  It was a 20-year journey to get this story published, and it's gotten rave reviews.  Learn about the amazing friendship between a world-famous ornithologist, Dr. George Archibald, co-founder of The International Crane Foundation, who has been saving the world's cranes, and the rare Whooping Crane named Tex, who believed she belonged with people.  They did a mating dance over a period of six years to help Tex lay a fertile egg.  When it happened, that chick hatched other chicks... who hatched more chicks... and eventually, the Whooping Crane species was saved from extinction.

Added educational content at the closing, including thumbnail images of all 15 species of cranes, Question & Answers, Vocabulary words and a photo of the real man dancing with the real bird.

Watch the crowd-funding video at:  DancingWithTex.

Buy it on Amazon:  DWT-Amazon 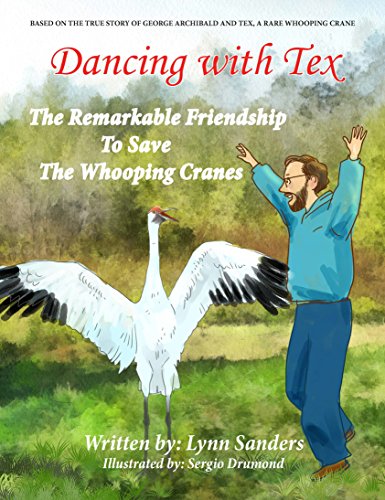 You need to be a member of SynerVisionCommunity to add comments!

This reply was deleted.